The ‘Beyond’ installation, created in collaboration with Anne-Laure Misme and Jennifer McColl, was presented at this year’s Interaktionslabor in Gottelborn, Germany. Organised and run by Johannes Birringer the lab focusses on questions of interactivity within modern performance art.

We reworked the structure for the new environment, and although the main crux of the piece didn’t change much it had a distinctly different atmosphere in an open air environment. here’s a photo from the event: 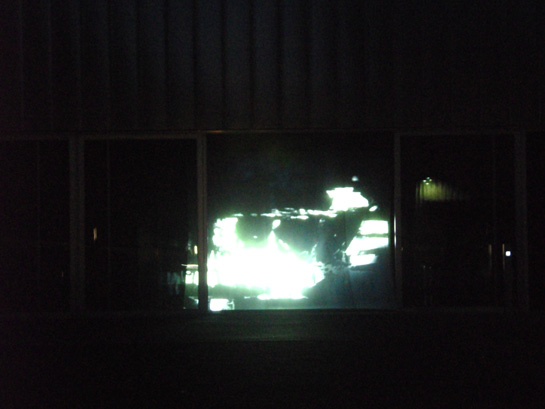 ‘Beyond’ was a piece originally conceived by Anne-laure Misme as a way to explore spatial relationships, both between physical space such as buildings and between ourselves and the world around us. The piece took the format of an installation, with the video element projected onto a string of 6 hanging textiles. The sound was presented on a 4.1 channel system. The footage shows abandoned buildings with broken down walls creating unusual connections between initially separate spaces. A body is used as a mask, with the slow movements turning the result into an almost abstract experience, whilst retaining appealingly human gestures.

The sound was inspired by the imagined soundtrack of a decaying building, combined with the mechanical and construction sounds which have gone some way to put the building in that state. Since the video is very grayscale I wanted the sound to be quite cold and inhuman as well. The quadrophonic system then allowed me to place this soundscape around the audience to make them feel like they’re experiencing it from the inside.

Below is a short video excerpt of the piece:

I’ve been a little slow getting this one up here, but here it is – some documentation material from the Meta-p(F)ace show created and performed in Athens, Greece.

This piece was devised in collaboration with Yiorgos Bakalos (performance with live cameras) and Stevan Lung (video/visuals). Whilst we all came to the project with ideas of where we wanted it to go, it was essentially devised over the space of 3 weeks, with the following 2 weeks consisting of approximately 10 performances at the Beton7 Gallery.

The piece explored the relationship between our private, personal space and how this affects our dealings with the world at large. Through the use of two wireless cameras strapped to the backs of Yiorgos’ hands (one facing in towards his face, and the other out) we examined this central theme, whilst also looking at how our memories affect our attitudes in the present, and how coming to terms with our past can liberate us from anxiety and misgivings about where we’re going.

Sonically the piece was made almost entirely out of audio recordings made in and around Yiorgos’ flat, trying to capture the background sounds and various times of day to build up a sonic footprint of the environment we were working in. I then layered these together to create an amalgamated impression of the soundscape, whilst at certain points introducing other elements (such as a synthesised drone) to create a sense of otherness, tension and dislocation. This latter part was very important since it cemented the idea of the individual vs the world, and the struggle that will ensnare all of us at some point in our lives.

The space itself consisted of two rooms: One large room which contained the Installation portion (projectors, speakers and an armchair) and a smaller room in which Yiorgos performed most of his choreography. Stevan and I were set up in this smaller space, so as to leave the audience to their own devices in the main area. Yiorgos began his choreography under a duvet on a bed in the small room, with his actions only visible on the two screens next door. Through this connection yet disconnection between the two spaces the audience had to choose whether to watch the bed or the screens, physically enter his personal space or watch it voyeuristically on the projections.

I won’t explain in great detail how the piece unfolds, since I think it has to be experienced in person. We’ll see whether there’s another opportunity for that to happen. To give you a feeling of the space and general tone, here some images (video to follow):

I’m writing this from a flat in Athens, where I am currently working on a performance art – installation piece to be performed on various days over the first two weeks of April. The piece revolves around the theme of personal space and how this conjures up certain thoughts an memories, as well as this personal space vs the unknown/intimidating nature of the world at large. It’s still very much in the developmental stage which is proving to be both productive and invigorating.

The team for this piece is (apart from me) Yiorgos Bakalos, who I met through my work with DAP Lab, and Stevan Lung who has travelled to Athens from Belgrade. I’ve included the flyer below and will put up video, audio and images as the documentation procedure moves along.

So, the project I have been working on with Mccoll-Misme has been show another 2 times (I have been a little slow on the updates this end).

The first of these was as a part of ‘Beyond Text: Making and unmaking text across performance practices and theories’ – presented at the Centre for Creative Collaboration in London on 28/01/2011. The event as a whole was fascinating, with all sorts of works presented on the Friday evening and a series of lectures on the Saturday.

31.10 was presented in the back room, with some alterations to both sound and visual arrangements. The audio was presented on just 2 channels this time due to technical constraints, though I don’t think it lost much in the small L-shaped space. The projections were displayed on vertical and horizontal white wooden boxes.

Here are some pictures from the event:


It was also presented at the Arts @ Artaud Performance on 16/02/2011. This was in the same space as the initial presentation, so the setup is very much the same! Check out the previous post about the project to get an idea!

The 31.10 installation is an ongoing collaboration with McColl-Misme. The first performance took place at the Artaud Centre for Performance on December 15th 2010 as part of the Masters in Contemporary Performance Making at Brunel. It revolves around the idea of combining multiple different media to create an interlocking web of patterns and rhythms and was essentially made of 3 components:

1) Two projected videos shown on perpendicular walls (the corner of the room) – one taking the form of a horizonal strip and the other a vertical strip. This footage featured and was edited by Misme with filming assistance from McColl.

2) A manipulated recording of a poem written by Misme and voiced by me. The recording was then fed through four speakers and then manipulated by ducking and shifting small segments of audio to create a feeling of movement and instability.

3) A 3D object placed to create a triangular formation with the two projected videos. This element also draws attention to the idea of rupture within the piece.

The poem itself is autobiographical, but presented in such a way that it’s not clear who’s life is being discussed. What follows is the text as written by Misme, specifically without punctuation so at to leave the emphasis up to the reader.

You can find out more details of Misme’s thoughts behind the piece at mccollmisme.wordpress.com

Below is an example of one of the videos used. Sadly it is only two of the four audio channels, but the piece is going to be performed for a second time at the Centre for Creative Collaboration for the ‘Beyond Text: Making and Unmaking Event’ on the 27th jan 2011, so if you wish to experience the next incarnation please come and join us.

I joined DAP Lab in May 2010. I was employed as sound designer and musician, working with digitally constructed live electronic sounds, with a remit to realise the ideas of the performers in a technological context. My work also sat alongside that of composer Oded Ben-Tal, where our different approaches sat nicely in contrast with each other. The whole project was in collaboration with Keio University, Japan and received funding from the Japan Foundation.

By the time I joined the ensemble Ukiyo 1 had already been completed, with the performance taking place in what is now the Artaud centre for Performance. The performance of Ukiyo 2 took place on June 18th 2010 in Maribor, Slovenia. The final incarnation of the piece took place on 26th November 2010 at the Lilian Baylis Studio in Sadler’s Wells, London.

The piece itself took the form of a network of different choreographies, involving varying number of the performers, primarily based around Hanamichi like rectangular performance areas. This was complemented by projected film footage and live video manipulation from Johannes Birringer, and a series of sound producing garments designed by Michele Danjoux. Hopefully the movie gives an impression of the performance as a whole.